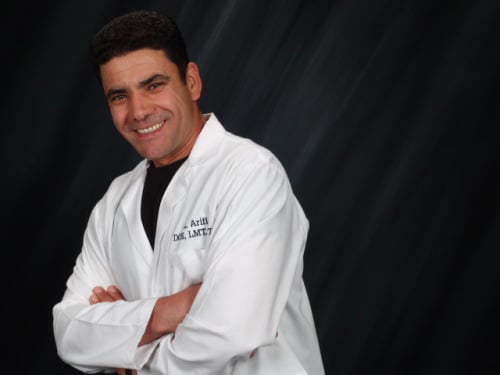 Zahir Arifi (LMT 104716) is a healthcare professional who has been practicing in the Austin area since 2007.  He initially worked with the chiropractic doctors of Southlake Spine & Sports, adding a dimension to the practice that won the loyalty of numerous clients. He also provided services at Lakeway’s World of Tennis. He has had his own clinic since 2009. Mr. Arifi moved to Texas from France, where he had several years of experience in a European clinical setting, as well as working with multiple track & field teams in Paris.

In 2006, Mr. Arifi was awarded the DOE degree by the European Council of Osteopathic Schools in Geneva, Switzerland, after successfully defending his thesis on the comparative benefits of joint-articulation-enhancement techniques, which he performed on select members of a team of nationally ranked athletes in North Africa. He is a certified osteopath in France, having received his training at Ecole Supérieure d’Ostéopathie in Paris.

He is a member of the International Association of Healthcare Practitioners – associated with the Upledger Institute, a Florida-based foundation that promotes the benefits of craniosacral therapy.  He has taken Upledger courses in both craniosacral and neuromuscular therapy to complement his existing foundation of knowledge in this area.

He is also a member of the Texas Association of Massage Therapists and Associated Bodywork & Massage Professionals. He is a Personal Trainer recognized by the NCAA-accredited National Federation of Professional Trainers.

He has participated in numerous specialty classes and studies, including:

On a personal level, Mr. Arifi is an avid hiker and runner, having won numerous regional and national-level races in France, including half-marathons, and qualified to participate in the 1992 Olympics in Steeplechase. He continues to challenge himself (and his son!) in local races, participates in national and international marathons, and has been a finisher in multiple Iron Man events. His professional philosophy is to engage the body’s ability to help itself. His objective is to enable his clients to reach and maintain peak physical condition naturally.